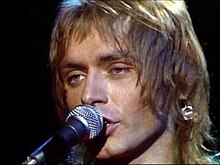 Benjamin Orzechowski (September 8, 1947 – October 3, 2000), known as Benjamin Orr, was an American musician best known as a singer, bassist and co-founder of the rock band the Cars. He sang lead vocals on several of their best known songs, including "Just What I Needed", "Let's Go" and "Drive". He also scored a moderate solo hit with "Stay the Night."