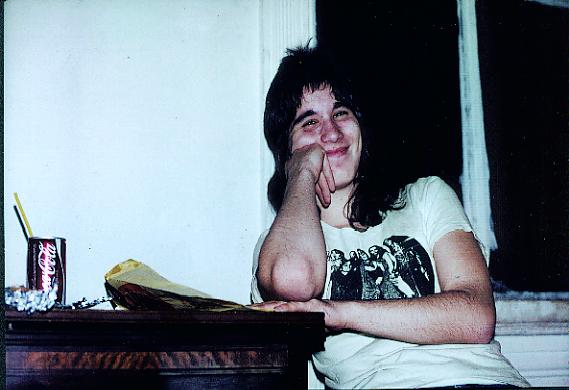 From The Fast Interviews:

Lou transports me back to a magical, yet largely forgotten musical era during the Glitter days, where Lou and his friend Walter would often check the Village Voice for mentions of Glitter Rock for “ventures into the big city.” Dates are foggy to Lou, and he approximates the year to be 1972, and his age to be 15. One venture lead to The Townhouse Theatre, where a band named The Fast (praised by a popular rock critic of the day, Lillian Roxon) were playing.  The Townhouse was a “mini-theatre” The Fast rented, most likely used for corporate presentations, that looked more like an apartment complex than a club.  Armand Zone was singing at this point, but Paul’s prescence was strongly felt, helping with lights, sound, and as a “foil” for Miki to bounce ideas off of.  Lou felt Miki always shared a “mental kinship” with Paul, even before Armand (Mandy to his friends).  The “splashy little show,” as Lou refers to it, had an Alice in Wonderland motif, where the boys went as far as having a waitress serving “drink-me tea and eat-me cookies” to the crowd.  Lou found the band “fun,” chatted with them after the show, came to subsequent shows, and kept crossing paths with the Zones afterward.