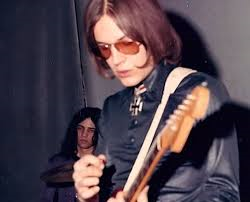 Ronald Franklin Asheton (July 17, 1948 – January 6, 2009) was an American guitarist, bassist, actor and co-songwriter with Iggy Pop for the rock band the Stooges. He formed the Stooges along with Pop and his brother, drummer Scott Asheton, and bassist Dave Alexander. Asheton, once ranked as number 29 on Rolling Stone'slist of 100 Greatest Guitarists of All Time is currently (as of November 2014) ranked at number 60.