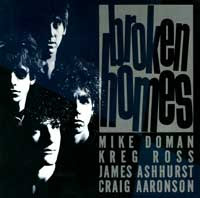 BROKEN HOMES was put together by Philadelphia native Mike Doman. The band had the distinction of signing a deal with MCA Records in the first week of 1986, but despite becoming one of the biggest bands in Los Angeles club circuit, the records failed to do the band justice at retail. 1988's 'Straight Line Through Time' produced by Tony Berg saw Ian McLagan contributing keyboards. The third album, ‘Wing And A Prayer’, was produced by Andy Johns. Mike Doman and the Broken Homes were featured on the original soundtrack of the 48 Hours sequel (Another 48 Hours - 1990) with "I'm All Right (Get Him A Doctor)". Bassist Jimmy Ashhurst would join Izzy Stradlin's Ju Ju Hounds band in early 1993. Ashhurst, along with guitarist Craig 'Kreg' Ross joined Ian McLagan's Bump Band before Ross took up with Lenny Kravitz.