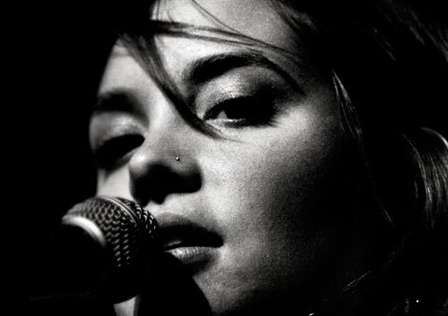 It’s a challenge not to fall in love with Cheyenne Marie Mize. Whimsical, haunting, twangy folk that’s dynamic and eschews the traditional alt country formulae, her debut, "Before Lately", is an amalgamation of contradictions – rugged and gentle, innocent and forlorn, spacious and intimate, desolate and uplifting. The New York Times, in a glowing review, says she "has a rare voice, sweet without being cloying, and weary without hopelessness." Guitar, bells, occasional percussion, and honey-tinged vocals make up this simple, immaculate collection of vintage torch ballads, engrossed in twinkling bucolic imagery that showcases a soul twice her age. Mize’s talent certainly did not go unnoticed. While Mize is no stranger to her hometown of Louisville by way of her other bands, Arnett Hollow and the Carter Family-channeling Maiden Radio, she introduced herself internationally on the 10″ release Among the Gold with Bonnie Prince Billy – a collection of late 19th century American parlor music handpicked by Mize and Oldham. She kicked off 2010 as a major player in Ben Sollee and Daniel Martin Moore’s Dear Companion tour.

2010 is the year in which Mize, who has earned her keep touring behind Bonnie Prince Billy, Maiden Radio, and Sollee and Moore, takes the front of the stage supporting her amazing EP. The challenge is on, but Mize will be hard to avoid in the near future. Her music was heard at the 2011 Sundance Film Festival in the closing credits of the film "to.get.her" and has been featured on the MTV show "16 and PREGANT".