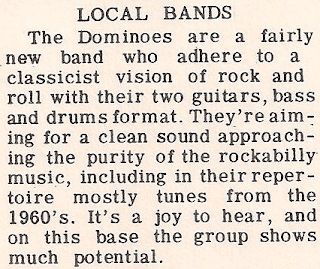 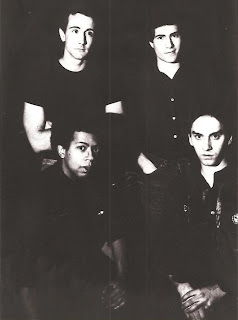 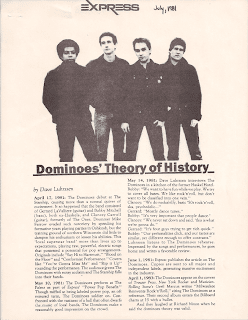 By mid-1980, Clancy wanted to move in a different direction. So he started rehearsing with Gerard LaValliere who had just left the Haskels. Marty Chittum and Mark Graves filled in for a short while, but things really came together for the band when Bobby Mitchell came on board. He had played in The Haskels as well, but left shortly after they released their stellar Taking The City By Storm EP. Bobby then suggested Mike Farrow, a drummer from Oshkosh, come in to solidify the Dominoes line-up. Mike started playing drums just a year earlier and the Dominoes would be his first band.Clancy, Gerard and Bobby started writing songs immediately. With the objective of having fun and not wanting to confine themselves to any one genre, their music contained elements of 50s rock n roll and 60s garage. Along with their infectious originals that many confused for covers, the band incorporated their own twists on classics ranging from Eddie Cochran to the 13th Floor Elevators. To add even more of a dynamic to their unique sound, all members shared vocal duties as they had a natural affinity for tight harmonies.Their approach was different than most other bands in town. They didn't want to over saturate the market, so they played shows sparingly, beginning in April of 1981. By this time Zak's had fallen by the wayside so the Starship became their mainstay. They were able to draw pretty good crowds. The scene was at its zenith with a flurry of exceptional local bands playing any given night of the week plus a constant flow of quality touring bands coming through town.