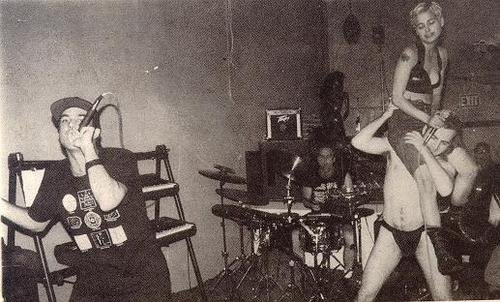 Ethyl Meatplow was an American alternative/industrial music band best known for their sole album, Happy Days, Sweetheart, released in 1993 by Dali Records, a division of Chameleon Music Group and distributed by Elektra Entertainment. The album's songs "Devil's Johnson," "Queenie" and "Ripened Peach" were made into music videos.

The album label lists band members as Carla Bozulich, Harold "Biff" Barefoot Sanders III and Wee-Wee (John Napier). Bozulich later went on to found the band Geraldine Fibbers, co-created Scarnella with Nels Cline, Red Headed Stranger with Willie Nelson, The Night Porter with Jessica Catron, Shahzad Ismaily and Ches Smith and has made 4 albums as Evangelista while integrating musicians from the American and Canadian post-rock underground of Constellation records. Biff Sanders was a founding member of Eric Avery's side project Polar Bear and continues to win awards for his soundtrack contributions for Project Runway. Wee Wee was in the band E. Coli which released an album, To Drool on Triple X Records in 1996 as well as helping form; record, and tour with Buccinator which boasted several "all-star" members from well-known bands. Wee-Wee was also a touring member of Nitzer Ebb for several of their U.S. and European tours for their "Big Hit" album. Wee-Wee (John Napier) eventually took a break from music; went back to school and received his bachelor's and master's degrees in social work from Humboldt State University. The death of John Napier due to uncertain causes was announced on November 11, 2012.