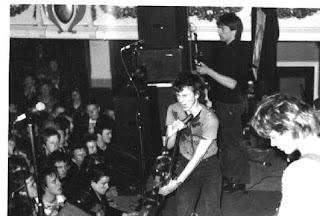 The band formed from the remaining members of the Epileptics (who later changed their name to Epi-X due to letters of complaint from The British Epilepsy Association) by Colin Latter (vocals) and Derek Birkett (bass guitar) with guitarists Andy Smith, Neil Puncher, and drummer Sid Ation (who was also a member of Rubella Ballet). Their debut EP "Neu Smell" was released on Crass Records in 1981. This included songs promoting vegetarianism and anti-war ideas, as well as "Tube Disaster", which featured a vein of black humour that was unusual amongst their peers.