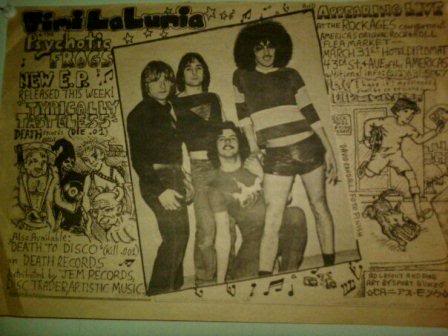 It was intended to be a one off novelty,because others started running with the idea, and I knew it was just a matter of time until there was a record; and so, Jimi LaLumia & the Psychotic Frogs was born: i'd never been in a band before,never made a record before, I was busy helping/managing others..and then suddenly, 10,000 copies of the single sold 'right out of the box' ,as they say, in 1977, and there was a demand for a next record, and live shows, so I put an actual band together.Worldwide, magazine guys who hated disco jumped on board; we got attention in Trouser Press, Gig, a jazz publication, DownBeat,Billboard, Variety,Circus,The NY Daily News,Rolling Stone put us in "Random Notes", the UK Melody Maker featured us as a single of the week(thank you,Ian Birch)and it just snowballed from there.As I mentioned above, even PUNK Magazine paid attention..lol.

Jimi LaLumia and The Psychotic Frogs were a fascinating group. On one hand, you had a trio of musicians that were playing hard tight rock grooves balanced against the self-described maniacal vocals of Jimi LaLumia. It worked perfectly! It was a unique sound that captured the essence of the punk scene in all its pissed off glory; yet there was a fresh spark of originality that separated the band from other groups of the time. It was the big balls lyrics of LaLumia that made the group so special.