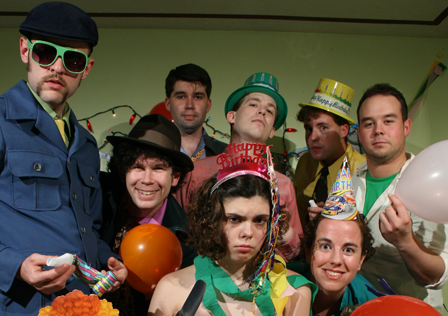 Lucky Pineapple is comprised of an unlikely combination of classically trained musicians, veterans of the Louisville punk scene, theatre performers, improvisational noise artists and even a first time performer. From their earliest days, since their inception in 2004, Lucky Pineapple have tried to play out of the ordinary shows including art gallery parking lots, Zombie Proms, film festivals, house parties, a student lounge at Transylvania University, as a musical interlude during a teen talent show at the Louisville Free Public Library, frequent appearances on WFPK’s Live Lunch series and at Louisville Slugger Field, home of the Louisville Bats AAA baseball team. Their lives shows have included light shows, video projection collaborations, matching tuxedos, inflatable palm trees, a go-go dancer and a semi-regular group of back-up singers. The band self released their debut album The New Rainbow in 2006 and were featured on a split seven inch with fellow Louisvillians VRKTM released by Noise Pollution in that same year. In 2005, recording engineer and Lucky Pineapple fan Mike Bridavsky was at a Tape-Op convention and found himself in a poker game for which the prize was a free day of recording at Steve Albini’s Electrical Audio in Chicago. He won and decided to donate his prize to Lucky Pineapple. The band accepted and chipped in for a second day of recording. The five songs that came from this session provided the foundation for "The Bubble Has Burst in Sky City". The band filled the album out with additional material recorded at their home studio.