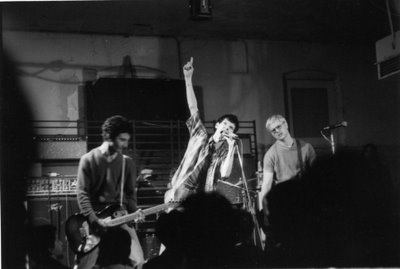 Wikipedia on the Middle Class:

Their sound evolved from being a blistering, shouted, arty version of punk which would be extremely influential to the hardcore sound that would emerge in the years following their first release, the 1978 "Out Of Vogue" 7 inch. This record featured the title track along with three other songs. After this they released the "Scavenged Luxury" 7 inch in 1980 which retained the assault of the first record while introducing the influence of UK bands Gang of Four and Joy Division. 1982 saw the release of their first full length album, the dark "Homeland". Their first seven inches were rereleased on the compilation album "Blueprint For Joy" along with several live tracks and songs they contributed to the Tooth and Nail compilation.