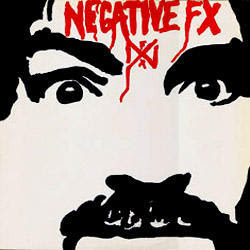 Negative FX was a hardcore straight edge band from Boston formed in 1981. Though the band lasted only a short time, playing only a total of five shows (six flyers exist), the band was well-known for their involvement in the local straight edge scene of the early '80s. Along with members of the bands DYS and SS Decontrol (SSD), Negative FX was part of the Boston Crew: a group of social friends who traveled around the country with SSD and other Boston hardcore bands.

Negative FX played fast and unmelodic hardcore punk that featured frequent gang vocals shouted along with the chorus. The band members consisted of Patrick Raftery on guitar, Rich Collins on Bass, Dave (Bass) Brown on drums, and their high profile vocalist Jack Kelly, who frequently went by the name of Choke. Choke went on to later form the band Last Rights, then Slapshot.