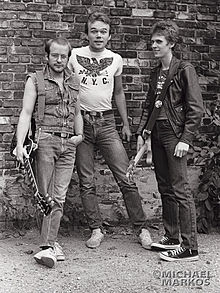 The Suicide Commandos are an American punk rock trio from Minneapolis, Minnesota. They formed in 1975 and released two 7" EPs on an indie label in 1976 and 1977 before signing with Blank Records (a subsidiary label of Mercury Records) in 1977. Their first album, Make a Record was recorded and released in 1977, and then re-released on Mercury Records on CD in 1996 and on Island/DefJam iTunes in 2007. A live album, The Suicide Commandos Commit Suicide Dance Concert was released on Twin/Tone Records in 1979, which was their last performance together before the band broke up. Only 1,000 numbered copies were pressed. In 2000 it was re-released on CD by Garage D'Or Records. The original vinyl release contained 19 tracks while the CD re-release increased this figure, bringing the total number of tracks to 32. Despite their short original 4-year stint together, the Suicide Commandos are considered the pioneers for jump-starting a punk rock music scene in the Twin Cities, which eventually produced bands like the Suburbs, Hüsker Dü, The Replacements and Soul Asylum.