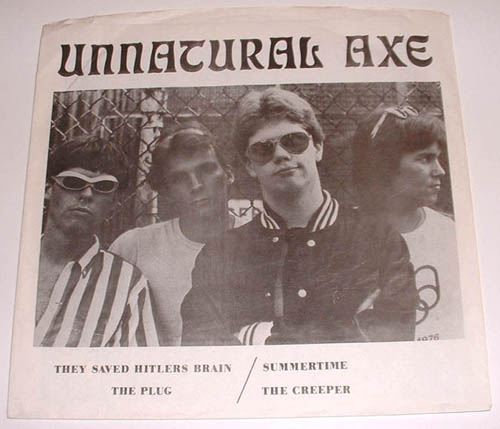 If you were into the Boston punk scene in 1978 or ’79, then you were probably into Unnatural Axe. Who couldn’t love a band that professed to be most influenced by the Dictators, New York Dolls, Ramones and Bobby Orr — Blasting out of their Dorchester basements, the members of Unnatural Axe (singer Rich Parsons, guitarist Tom White, bassist Frank Dehler and a variety of drummers) plied the short list of available clubs willing to book punk rock (The Rat, Cantones, the Club) and left a trail of beer bottles in their wake. Radio icon Oedipus, then newly arrived at rock powerhouse WBCN, was an early fan and friend of the band, giving generous airplay to its first four-song EP, which included the World War II sci-fi thriller “They Saved Hitler’s Brain.” The lyrics that alluded to saving the brain but not another portion of Adolph’s anatomy led to the song being briefly banned on WMBR in Cambridge, which only heightened the band’s legendary underground status. Unnatural Axe became New England cult heroes and happily continued playing “Three Chord Rock” (another of their classics) for years to come. Alas, stardom eluded them and the members went their separate ways, but occasional reunions have sustained into the new millennium as Unnatural Axe continues to spill its Dorchester seed onto an unsuspecting world.

In 1976, a decade before Hulkmania (we're talking Chief Jay on the warpath and the Iron Claw), Dorchester's Richie Parsons (sales clerk at Filene's basement) and guitarist Tommy White (original member of the cast of Channel 2's ZOOM) discovered Handsome Dick Manitoba dressed as a professional wrestler on the cover of The Dictators Go Girl Crazy LP. It inspired Richie to pick up the guitar as well and cover the Ramones, the Dictators and DMZ with the three chords he learned. Along with Richie's older drummer brother Billy, they ventured out to a Berklee rehearsal studio where they met Jamaica Plainard bassist Frank Dehler. Berklee had them quickly removed. When Richie wasn't busy waiting on Jonathan Richman or George The Animal Steele in the Basement, he began residency at Cantone's as a photographer for bartender Loretta Baretta's Miscarriagefanzine. In December of 1977, Unnatural Axe debuted (with new drummer Dom DaYoung) at Cantone's in a benefit for follow fanzine Frenzy. The bill included Thrills , The Bimbos, The Customs, The Space Negroes , and the Wild Johnnies . Frank was ill and was temporarily replaced by scenester Rita Ratt for the night. They impressed arvulven Records president Count Joe Viglione and were rewarded studio time at Newton's Poor Boy Studios. The results were released in October of 1978 as an EP.The Creeper/They Saved Hitler's Brain (both inspired by late night trash flicks), The Plug (about Karen Anne Quinlan) andSummertime soon blared on Oedipus's Demi-Monde. Drummer Dom DeYoung was soon replaced by one Tommy Taylor. By 1979 the act became one of the city's tightest and opened at the Paradise 11 times that year, establishing them as also one of Boston's hottest draws. By 1980 they were defunct, but not before they left the U.S. with one of our greatest hits, The Man I Don't Want To Be.