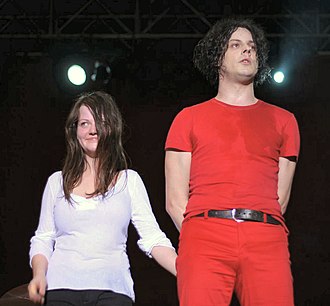 The White Stripes were an American rock duo formed in 1997 in Detroit, Michigan. The group consisted of Jack White (songwriter, vocals, guitar, piano, and mandolin) and Meg White (drums and vocals). After releasing several singles and three albums within the Detroit music scene, The White Stripes rose to prominence in 2002, as part of the garage rock revival scene. Their successful and critically acclaimed albums White Blood Cells and Elephant drew attention from a large variety of media outlets in the United States and the United Kingdom, with the single "Seven Nation Army" and its now-iconic guitar line becoming their signature song. The band recorded two more albums, Get Behind Me Satan in 2005 and Icky Thump in 2007, and dissolved in 2011 after a lengthy hiatus from performing and recording.

The White Stripes used a low-fidelity approach to writing and recording. Their music featured a melding of garage rock and blues influences and a raw simplicity of composition, arrangement, and performance. The duo was also noted for their fashion and design aesthetic which featured a simple color scheme of red, white, and black—which was used on every album and single cover the band released—as well as the band's fascination with the number three. The band's discography consists of six studio albums, one live album, two extended plays (EP), one concert film, one tour documentary, twenty-six singles, and fourteen music videos. Their last three albums each won the Grammy Award for Best Alternative Music Album.