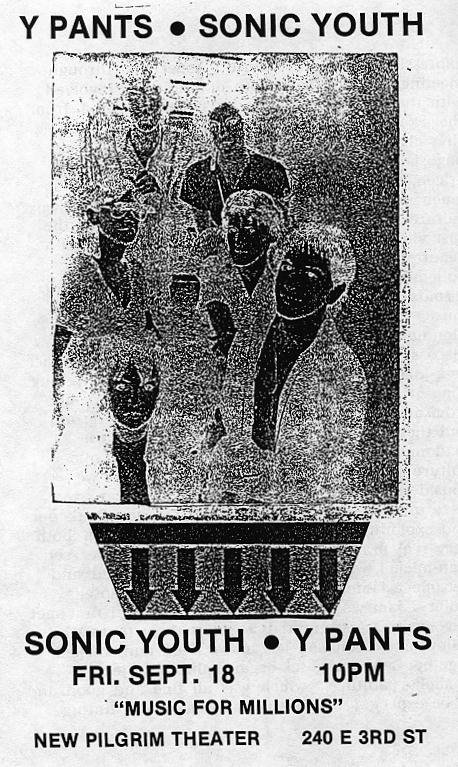 Greg Bullock writes: I think also on this bill were hardcore bands The Nihilistics and the Misguided. There was also another "noise band" (as we used to call them - ha!) besides SY. Could have been Rat At Rat R or Live Skull as both were getting started at that time. Now that I think of it, must have been Rat At Rat R. I'm thinking this must have been the gig because it was at a theatre of some kind, complete with seats bolted to the ground a la a school auditorium or old-style movie theater. An unusual venue for a punk rock show. There were maybe 20-30 people there. Could have been fewer. I was big into hardcore at the time and I remember The Misguided being very Hardcore. The bass player from The Nihilistics threw up on stage between songs. My buddy and I were very impressed by this. Later found out he could vomit at will and threw up at every gig. Ha ha. There were other bands on the bill--Y Pants apparently, though I have no memory of them whatsoever--but I can only remember these few. Anyway, SY was quite a spectacle because they had about 20 guitars, all very beat up and funky-looking and a chick bass player. They played so loudly and so brutally that some people--including me--left the theatre and waited in the entryway/foyer area outside. Little did we know it was the beginning of such a creative and influential band that would be around for the next 20+ years. Anyway, if you can confirm that this is in fact the correct line-up you may want to add the The Misguided, The Nihilistics and Rat At Rat R to the list of other performers. Just in case any of the other two dozen people that were there decides to stop by and reminisce.