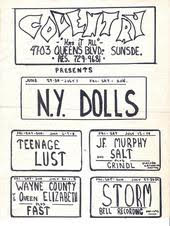 From This Ain't the Summer of Love:

While in New York City in the 70's working with my band - the "Magic Tramps" - featuring Eric Emerson, Warhol Superstar -we were asked to convert a club in Queens NY, called the "Popcorn" into a Rock club called the "Coventry". The bill was the "Magic Tramps" and "Link Wray". We would perform a show with Eric Emerson and then Eric would leave the stage and Link would come on and immediately turn his amp backwards towards the wall and start playing "RUMBLE" ... Music to my ears. It was such a thrill and honor to play a week with Link and get to know him as a person.

Cyndi Lauper - Doc West, Solo ArtistExcerpt from:
Kiss Alive Forever: The Complete Touring History
by Curt Gooch & Jeff Suhs [p. 17]Coventry was a big glitter club. I was in a band called Doc West, and we would play at Coventry at the tail end of [the] glitter [movement]. We played on dead nights sometimes for just five people.

From My Life in the Ghost of Planets - The Story of a CBGB Almost-Was:

[F]or at least a year, there was really only one venue in all of New York City where a band of regular rock bozos could get booked playing original material through Marshall stacks: the Coventry Club on Queens Blvd. in Sunnyside, about two miles east over the 59th St. Bridge. Yes, this is the joint from KISS lore, too.

The club was a dump, a faceless, everything-painted-flat-black dump. There were two rooms. You walked into a run-of-the-mill joint, jukebox, cigarette machine and toilets on the west/left, a standard issue bar running the length of the room on the east/right. Behind that was another room, a small stage on both the east and west walls, each with a barely adequate PA and lights. While a group played on one stage, the next band would set up on the other.

This Queens dive was pretty much The Planets’ only available venue.

You will not be surprised, I’m sure, to hear that the Coventry Club was, uh, suspected of being a flat-out money-laundering joint. Every time we ever played there, there would be five or six ominous guys slouched at the bar. They clearly hated rock & roll, hated rock bands, hated having to keep their jackets on to hide their guns. This wasn’t even a maybe; these guys were hardcore lower-level gangsters. Tough, sullen, chip-on-their- shoulder thugs. Scary!

In less than a month after Ace joined KISS, they had their first show at a small club called Popcorn, later changed the name to Coventry, located in Sunnyside, Queens on January 30, 1973. The number of audiences was very far from their later arena tours. Less than 10 people, just like many bands had to pass. The lucky thing was Joey Ramone of The Ramones was among one of the few audiences and he was impressed by KISS’s performance and loud sound. KISS had a few more gigs at the live house.

Coventry was long gone in mid-1970’s. The address itself, 47-03 Queens Boulevard, doesn’t exist anymore. The site is now a commercial building near the intersection of Queens Boulevard and Roosevelt Avenue under 46th Street Station of 7 subway line.