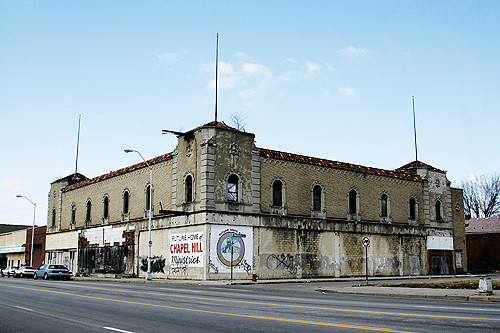 From the Detroit News:

In 1966, [Russ] Gibb purchased the Grande Ballroom, a 1920s and 1930s dance hall, with a prime, hardwood floor upstairs, that once provided a hangout for the city’s infamous band of underworld bootleggers and racketeers, the Purple Gang.

Gibb saw the need for the “new generation,” as the baby boom youth of the 1960s were sometimes called, to have a hangout of their own, complete with their new music, their increasingly psychedelic thoughts and their counter-culture. He helped turn the Grande into a Goliathan presence on “the scene” in Detroit from the late 1960s to the early 1970s.

It was the venue for aspiring groups like the MC5, Commander Cody & His Lost Planet Airmen, Frijid Pink, Alice Cooper, Savage Grace, Ted Nugent, James Gang, SRC, the J. Geils Band and the Amboy Dukes. They also included already prominent rock stars of the day who have become legend, like Led Zeppelin, Cream, B.B. King, Janis Joplin, Pink Floyd and The Who.