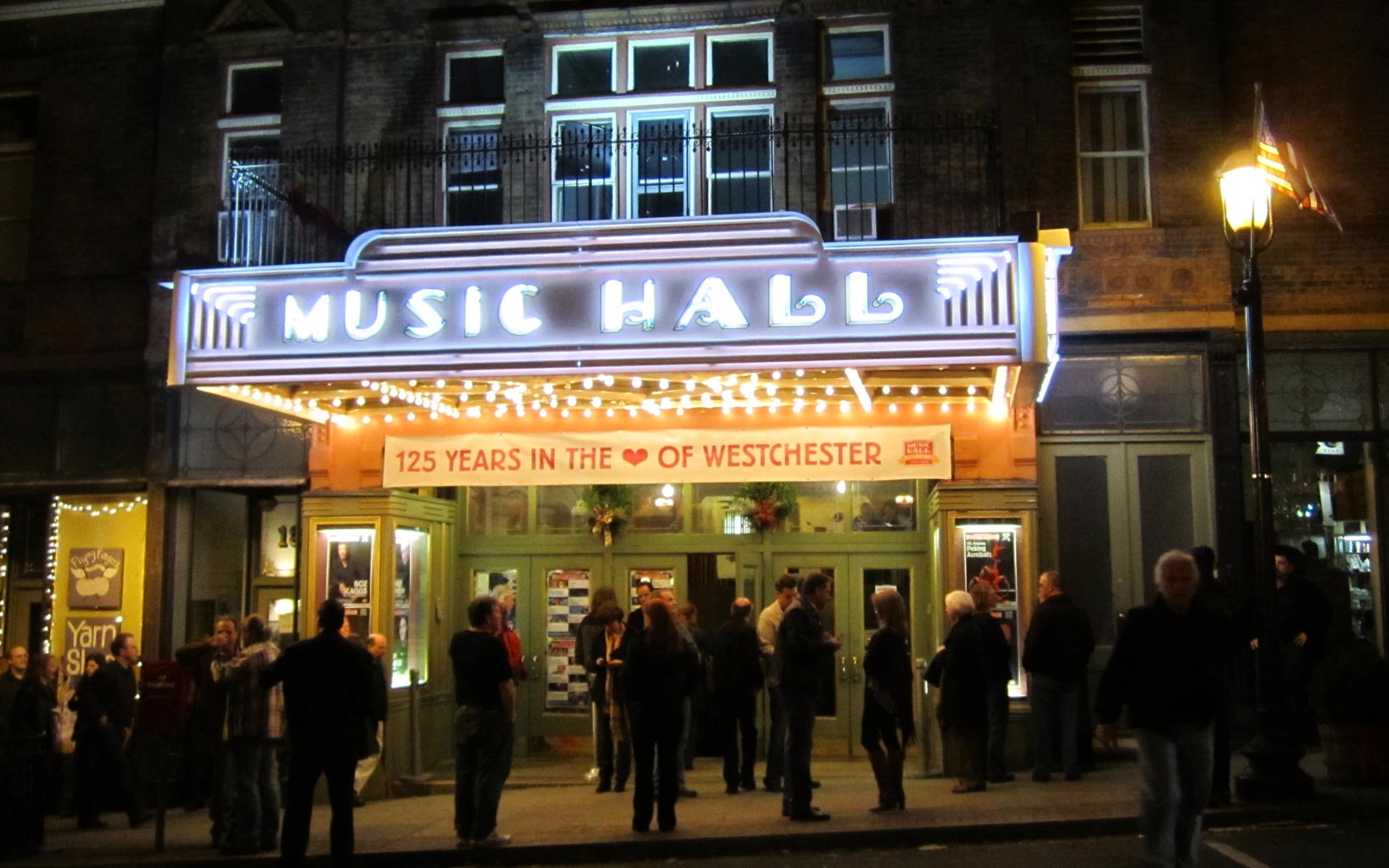 From the Tarrytown Music Hall site:

The historic 843-seat Music Hall, erected in 1885 by chocolate manufacturer William Wallace, is the oldest theater in Westchester County and one of only 6% of theaters in the United States built before 1900. 2010 marks the Music Hall's 125th anniversary and the 30th anniversary of its rescue from the wrecking ball.

The Music Hall was built during Tarrytown's "Millionaire's Colony" era. Notable Tarrytown residents such as the Goulds, Rockefellers, and Vanderbilts were patrons of the Music Hall, participating in its elaborate flowers shows, balls, and entertainment. Designed by distinguished architects Theodore DeLemos and August Cordes who also built New York City's Grand Central Palace and the Macy's building at Herald Square, the Music Hall's facade is considered to be one of the finest examples of Queen Anne decorative brickwork in the county. The Music Hall was one of the first theaters to show silent films in 1901 and was the venue for several national causes, including women's suffrage in 1915. Antonin Dvorak, Rafael Jossefy, Mae West, and Woodrow Wilson are among the first performers and speakers to grace the Music Hall stage.

From the 1930's on, the Music Hall presented first run films. The Music Hall closed its doors in 1976, largely due to the rise in popularity of multiplexes and television, and it was soon thereafter proposed by the Village of Tarrytown that the theater be torn down to make way for a parking lot.

The Friends of the Mozartina Musical Arts Conservatory, a 501(c)(3) nonprofit, educational, and cultural organization, purchased the theater on Valentine's Day, 1980 with the purpose of establishing a center for the performing arts. The rescue was a risky one, for not only was the theater located in what many considered to be a depressed area, but it was also not operational due to a leaking roof, frozen heating pipes, insufficient electrical power, and other problems. The purchase and extensive renovations were made possible by Bank of New York Vice-President Stephen Byelick who arranged a mortagge, and Founding Board Member Berthold F. Ringeisen who, convinced the theater was important for the community, placed his home and life savings up as collateral. As there was no money available for a staff, the theater was completely operated by volunteers for twenty-three years and Berthold and his wife, Helen, did most of the work themselves while balancing the demands of their full-time jobs as a college language professor and piano teacher respectively.

The Friends placed the Music Hall on the National Register for Historic Places in 1980 and the Music Hall today is a fully operating theater, offering the best in music, theater, dance, and film. With a full-time staff, forty freelancers, and over 200 volunteers, it has become a cultural destination, attracting over well over 80,000 people including 30,0000 children on an annual basis from all over the tri-state area. The theater is an economic engine, generating over $1 million for the local community and it contributes between $50,000 and $80,000 of space to local nonprofit organizations. It is a recent recipient of the ArtsWestchester 2007 Arts Award, was voted the "Best Music Venue" and "Best Kids' Theater" by the readers of the Westchester Magazine in 2008 and 2009, and was honored by the Thursday Club in 2009, a privilege bestowed on a select few.